Bill Barminski is a self taught artist whose work extends across a broad range of mediums including painting, interactive media, music videos, graphic design and music. His work includes solo exhibition of paintings and drawings, unique projects such as E3 booth design for Nokia Interactive, billboard design for Absolut Vodka, designing gas masks based on cartoon characters and directing and co-directing music videos for Baz Lurhamn, Gnarls Barkley, Death Cab for Cutie to name a few. Recent video projects have been featured at the Sun Dance Film Festival and the Los Angeles Film Festival.

ARTWORK: Starting in the mid 1980’s Barminski began painting and drew his subject matter from classic advertising from the 50’ 60’s and 70’s. His paintings are visually colorful and exhibit a strong graphic sense that informs the content which addresses mass media and consumer culture in an ironic manner. His shows often incorporate video installations and sculpture elements to unify his themes. His paintings hang in many collections and have been reviewed in numerous magazines such as Art in America, Art Forum and Flash Art. A review in Art in America said of his work, “The advertising-derived images that Barminski incorporates into his paintings are meant to evoke postwar America. Like filmmaker David Lynch and others, Barminski is interested in the ominously surreal side of the good life.”

In the 1990’s Barminski designed several award winning interactive projects based on his own art work. These projects included Barminski: Consumer Product, The Encyclopedia of Clamps and Cyclops Boy, The One Eyed Detective. Mark Frauenfelder described this interactive work in the pages of Wired Magazine as “…like a carnival operated by Bill Gaines and B.F. Skinner.”

MUSIC VIDEO: As a video director Barminski was resonsible for the music video for the Sunscreen Song for Baz Lurhman. Other video projects include a special concert film for the GooGoo Dolls, an film for the Swedish clothing company H&M and an animated video for the spoken word project Mortified.

Much of his current his video work is done under the name Walter Robot with his directing partner Christopher Louie. Together they have created music videos for Gnarls Barkly, Death Cab for Cutie, People in Planes, Underoath, Vitalic and Modest Mouse. Their animated short, Joel Stein’s Adventures was selected for the Sundance Film Festival 2009 while the music video “Grapevine Fires” won the Los Angeles Film Festival 2009 Best Music Video award and has been nominated as an MTV Breakthrough Video of the year 2009.

TEACHING: Barminski is an adjunct professor in the Department of Film and Television at UCLA. He has been sharing his work and knowledge with students there since 1998.

OTHER: Other work includes several music projects such as the Sub Atomic Nixons and the Number H. Both are fictional bands that feature Bill’s music and video work and are frequently featured on BoingBoing.net

Bill Barminski and The Challengers of the Unknown performance at the ROBERT BERMAN GALLERY 35 Year Anniversary Show Saturday September 13, 2014

Bill Barminski and The Challengers of the Unknown performance at our 35 Year Anniversary Show Saturday September 13, 2014 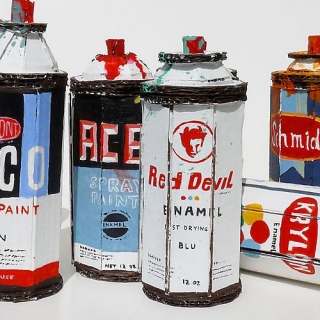