View exhibition and available works on our Artsy page

ROBERT BERMAN GALLERY is pleased to present Abrasive Affirmations, featuring new paintings by Dennis Mukai. Diligently created, Mukai’s paintings are a unique process all his own. Often confused as photographs, Mukai’s paintings are a reductive process of sanding down a smoothly painted panel of masonite in order to utilize the mid-tones to develop the resulting image. The work is then finely finished with a varnish, leaving no trace of where the masonite begins and the varnish ends.

“The method of creating my paintings is subtractive. A paint brush is never used. The surface layer of dark paint is removed with sandpaper to reveal varying degrees of the white gesso surface underneath as opposed to the more traditional method of applying paint to a gessoed surface.  The technique is slow and precise.  The process of minutely abrading and distressing the two-dimensional surface to ‘sculpt’ the images becomes an obsessive meditation.
In this new series my paintings are an exploration of double entendres.  The juxtaposition and ambiguity of my word play is intended to bring relief to the dark, evocative visuals.  The humor is personal, intentional…and at times, abrasive.”
-Dennis Mukai

Dennis Mukai was born in Hiroshima, Japan and raised in Southern California.  He is most widely recognized for his published portraits of beautiful women.  His subjects have included Pamela Anderson, Tia Carrere, Jennifer Flavin, Janet Jones Gretsky, Paula Barbieri, Kimberley Hefner, Mimi Rogers and Linda Sobek. As a contributing artist, these paintings were featured monthly in Playboy magazine throughout the 80's and 90's. His numerous one-man shows throughout the United States consistently sold out his original paintings, limited edition prints and posters.

A graduate of Art Center College of Design and technically trained as an illustrator and graphic designer, Mukai's client list has included Levi's, Volvo, Honda, Coca-Cola, Mattel, Disney, the March of Dimes and DirecTV. His works have garnered awards from the Society of Illustrators, the Creative Black Book, ADLA, Print, and Communication Arts.

Mukai crossed over into photography after his years of shooting the models for his paintings. Inspired by Edward Steichen, George Hurrell, and Albert Watson, artists in the past who have successfully made this transition, Mukai has been no exception in his ability to translate his vision into a different medium. In 1997, Mukai art directed and photographed the one-sheet for the Academy Award Winner for Best Live Action Short Film, Visas and Virtue. Focusing mainly on celebrity portraiture, his subjects have included Macy Grey, Ice T, Keanu Reeves, Kid Rock, Ziggy Marley, Robbie Robertson, T Bone Burnett and Duran Duran to name a few.

Early in his career Mukai had the honor of illustrating the cover for Playboy Jazz Festival.  Mukai was asked to design the official US-Japan Expo poster in 1996.  Freelancing as creative director and marketing advisor for ICON Shoes, Inc., from 1998 to 2000, he established the identity of this unique start up company featuring artsists’ work on shoes. Mukai led the creative for Progressive Beverages, Inc. in branding and bottle designs for HAN Asian Vodka and Kigen Sake. In 2005, Mukai was selected to create the official poster for the U.S. Tennis Open and the 107th Lunar Year Festival poster for Chinatown LA in 2006.  He has freelanced as creative director/graphic designer of Drymax Technologies Inc., for the past 12 years.

In recent years Mukai has successfully made yet another transition into the world of fine art. He unveiled his new works at Bergamot Station in Santa Monica at the Robert Berman Gallery in the summer of 2008. Often mistaken for photographs, Mukai’s new works are painstakingly created using only sandpaper to remove layers of paint to gradually reveal the white of the original surface, his own technique developed and perfected through trial & error. Inspired by primitive photos from the advent of photography, Dennis' realistic yet distressed images trigger the emotions of recollection. Renowned art critic, Peter Frank expresses, "Mukai's pictures manifest a reality that exists within our minds, a reflection, not on what we see or know, but how we see and know it."  An exhibition of his newest works is scheduled for February of 2017.

Technically uncompromising, maintaining a bold visual sense, yet communicating with a refined subtlety, Mukai's projects today offer him the opportunity to cohesively incorporate his talents as artist, designer and photographer. 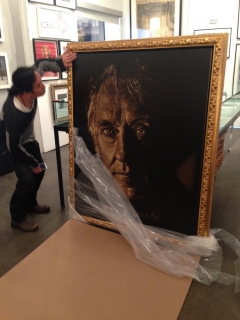