Robert Berman Gallery is pleased to present Playground, the second solo exhibition of photographs by Los Angeles based collaborating photographers Jeff Charbonneau & Eliza French on view April 3, 2010 through May 5, 2010. A reception for the artists will be held Saturday, April 3, 2010 from 7-9p.m. in conjunction with MOPLA.

As the artists’ first foray into the world of living geometry, the photographs of Playground play with primary shapes and their literal and symbolic relationship to human subjects and the natural world. In these highly-designed panoramic pictures, Charbonneau and French stray away from the emotionally driven narrative that characterized their previous series, Massillon, to create visual poetry through experiments with proportion, distance, and repetition.

Each picture begins with the artists’ intervention into a found landscape or surface through the decisive placement of objects, such as large monochromatic spheres. From there, a scenario is performed which transforms the shapes into effigies of mystery, devotion, and superstition. Fanciful female characters return in Playground, but their diminutive figures are set upon sweeping and stark landscapes as if in a play-space one might comfortably reach into and rearrange on a whim. The spheres to which their attention is often transfixed become reminders of the planetary system which envelops all of us and perhaps, the eternal desire to render it in a familiar plane.

Jeff Charbonneau and Eliza French have been working together since 2004, when a mutual interest in the photographic medium brought them together. Their performance-based images are created through a partnership from conception to finish and have been featured in art fairs both internationally and stateside. They are currently included in a major traveling exhibition of photographs titled The Art of Caring: A Look at Life Through Photography. This exhibition, curated by Dr. Cynthia Goodman opened at the New Orleans museum of art in 2009 and is accompanied by a monograph. Both artists live and work in Los Angeles. 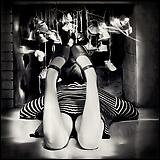