During the months of March and April – RBG presents a select
overview of forerunners of the street/graffiti art movement and the
new surrealism– aka low brow. Mixed in with these established
outsiders will be artists rooted in other genres but whose work also
explores the street phenomena.

The tie that binds this exhibition is
a commitment to the idea of urban space and works meant to be
outside as well as inside, both in the physical and literal sense.
Highlights of the exhibition include works by Robert Williams, an
original panel from the Yerba Buena Center for the Arts - San
Francisco by Barry McGee, rare prints and posters by Robbie
Conal, Shepard Fairey and Banksy, a major painting by James
Doolin from 1991 of a downtown LA freeway-scape titled “East
Wind” and a Retna 12’ x 4’ wood panel from the Seventh Letter
Collective show - Angels Will Rise (pictured right).

Also, from the Dennis Hopper collection, a seminal pastel on paper
by John Valadez (pictured below) “Leed’s Shoes,” 38.75” x 100.” 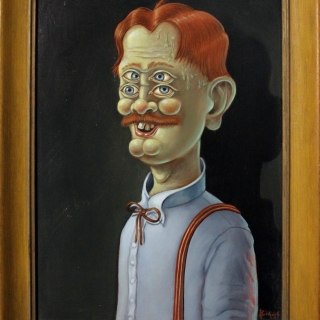