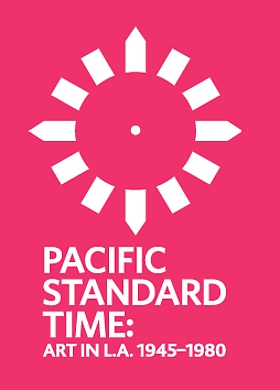 About Pacific Standard Time: Art in L.A. 1945 – 1980
Pacific Standard Time is a collaboration of more than sixty cultural institutions across Southern California, coming together for six months beginning in October 2011 to tell the story of the birth of the Los Angeles art scene and how it became a major new force in the art world. Each institution will make its own contribution to this grand-scale story of artistic innovation and social change, told through a multitude of simultaneous exhibitions and programs. Exploring and celebrating the significance of the crucial post-World War II years through the tumultuous period of the 1960s and 70s, Pacific Standard Time encompasses developments from L.A. Pop to post-minimalism; from modernist architecture and design to multi-media installations; from the films of the African American L.A. Rebellion to the feminist activities of the Woman’s Building; from ceramics to Chicano performance art; and from Japanese American design to the pioneering work of artists’ collectives.

Initiated through $10 million in grants from the Getty Foundation, Pacific Standard Time involves cultural institutions of every size and character across Southern California, from Greater Los Angeles to San Diego and Santa Barbara to Palm Springs.