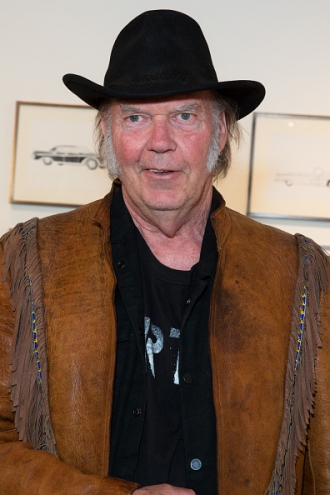 A case could be made that motor vehicles run a close second to electric guitars in the hierarchy of technological devices that have shaped Neil Young's life.

The two-time Rock and Roll Hall of Fame inductee underscored that point in his just-published book, "Special Deluxe: A Memoir of Life & Cars" (Blue Rider Press, $32), a loving rumination on the litany of vehicles that have taken him from here to there throughout his 68 years.

"See that car on the screen there?" Young said Monday night, pointing across the gallery during the opening of the first extended exhibition of his paintings at Robert Berman Gallery in Santa Monica. On display through Nov. 30, some two dozen watercolors serve as the book's illustrations. "That's the car that got me down here," he said, referring to a black, 1953 Pontiac hearse he drove from Toronto to Los Angeles in 1966 and which figured into the formation of Buffalo Springfield with Stephen Stills.

Young and Stills had met previously in Canada and had hoped to work together again some day after both left for greener pastures. They might have never reconnected had Stills and singer-guitarist Richie Furay not spotted Young's impossible-to-ignore hearse driving the opposite direction down Sunset Boulevard. Stills whipped a U-turn in traffic and quickly shouted them down, and shortly thereafter Buffalo Springfield was the talk of the Sunset Strip music scene.

"It broke down immediately as we were going to visit … I think it was the Byrds manager," said Young, dressed in a weathered brown leather jacket over a black Oxford shirt on top of a black T-shirt. "We went to their office, then we were driving back to our motel room and the driveshaft fell out on Sunset Boulevard. So that was it for that car. I didn't have enough money to fix it."

Young's latest avenue of expression adds yet another line to his already lengthy resume.

"I started with photographs, then I started thinking that photographs didn't really go anywhere — they're just photographs," he said of his decision to delve into painting. "Then I thought maybe I'll trace them and see what tracings look like — maybe just pencil tracings. I didn't want to be specific.

"I painted one with some charcoal and some watercolors, and the publisher said, 'Wait a minute — what's that?' I said, 'I thought with some of the special ones maybe I'd color them a little bit.' He said, 'Our art department thinks you should do all of them like that.'"

That request added two years to the creation of "Special Deluxe," which comes at a time when two other big projects from Young are surfacing: his new album "Storytone" and his Pono music playback system.

"Storytone" is an unusual two-CD set that features the same songs performed two ways: in stripped-down, largely acoustic arrangements on one CD; then on the other with accompaniment by a 92-piece orchestra. Pono, which has been gestating for years, is Young's response to the diminished quality of recorded audio in the MP3 era.

"I've been working on a lot of things for a long time, and I don't know, it just all happened at once," Young said. "A lot of things just got finished. It's kind of interesting, isn't it, the way it appeared out of nowhere?"